Stories about plants. And people

Listening to: Enya, Storms in Africa

“Dear Reader: You and I are related, both in blood and through figs.”

Figs have been part of my story since I was a child.

Not that I noticed them at the time; for many years they were in the background of my memories, whether as stumpy trees that yielded fruit others loved eating, or as the benevolent green giants that shadowed our front school yard.

I don’t think I knew they were related, my family’s fig trees and the behemoths at school. At some point though, I began paying close attention to this group of trees every time I stumbled across one, whether in real life or in books.

Fig trees crop up pretty often when you look for them, you see.

They were in the Egyptian myths I so loved when I was a kid; they were lining the streets of the cities I’ve lived in; they were in Ugandan craft shops transformed into bark cloth; they were in my mother’s yard, and on those incredible pictures of old Cambodian ruins…

In the end, coming to love fig trees was inevitable: they wear you down by virtue of being everywhere you look— even when you’re not seeking them out on purpose. 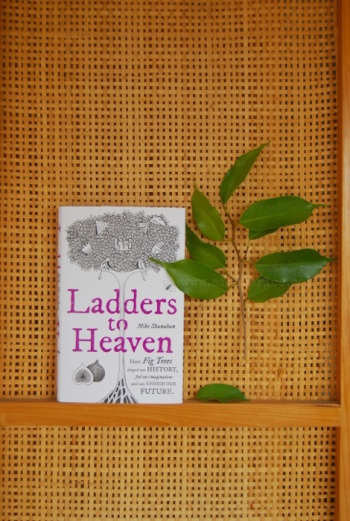 Such was the case with this book, which I found via the author’s blog Under the Banyan.

I recall being thrilled when I discovered the website; its tagline, “Stories about us and nature”, described so well what I was trying to do, and the author was a biologist, too! So I began following it, and I soon discovered this guy had a thing for figs.

The banyan (Ficus benghalensis) that gave the blog its name? It was there for a reason.

He was even writing a book on the cultural history of the genus Ficus. So when the occasion came once it was published, I bought a copy. I thought hey, figs are part of my story, after all; it’ll be fun to learn more about them…

After reading the book though, I realised I was nothing special.

Because figs have been part of virtually everybody’s story, whether they realise it or not, since forever. The deep roots of this genus have enfolded you —yes, even you!— in a quiet embrace that encompasses the entire human race.

Let me share with you my impressions as a reader, so you can fig(hah!)ure out whether the book might pique your interest, too…

*UK edition; in the US it’s being published under the title Gods, Wasps and Stranglers: The Secret History and Redemptive Future of Fig Trees.

The book in three lines:

An exploration of fig trees (genus Ficus) and their varied, amazing and even vital roles in our cultures and ecosystems. It’s about nature AND culture, and how fig trees bridge the gap (?) between the two.

If there’s a word I’d use to describe myself, it would be curious. About everything (okay, about most things at any rate).

This means that, although I love biology, I also love art and linguistics and anthropology and history of religions and physics and history and psychology and so on and so forth… and I like them combined at the same time. Nature and human culture, together.

As it happens, a biologist could tell “Stories about nature and us” and yet focus exclusively on the science. However, Shanahan has written a book that celebrates the many and diverse ways human beings have interacted with fig trees, honouring them each in its own way— scientific and spiritual, whether born out of intellectual quest, folklore traditions, religious beliefs, or conservation efforts.

Not only are they all important: he paints them as equally important.

And that’s something I find remarkable.

– Learning amazing stories and anecdotes about some species I was already familiar with.

As a fan of botanic gardens, I’ve had the opportunity to see my fair share of “exotic” species, among which some pretty amazing fig trees. And although most of them are quite impressive, I have a soft spot for Ficus religiosa, with its gorgeous heart-shaped leaves that rustle like streams in the wind.

Thus it was with great pleasure that I discovered an entire chapter devoted to it (Ch. 3. A Long Seduction), where I learnt tons of fascinating stories.

I found out it was a strangler fig, and that it could (unlike other strangler figs that may ‘only’ smother their host trees to their death) actually cleave into its host’s wood and split it apart. This would, of course, turn it into the perfect symbol of strength, a “destroyer of enemies”, as the Vedic peoples would adopt it.

I had known about the Buddha’s attainment of Enlightenment under a F. religiosa tree, but I didn’t know that

“For hundreds of years before any image of the Buddha appeared, it was the fig tree surrounded by adoring devotees that sculptors portrayed at Buddhist temples.”

This same pattern (stumble across a fig species I knew, be wowed with unexpected anecdotes about it) happened with my beloved Mediterranean Ficus carica, with the African Ficus sycomorus… the book was full of constant surprises about fig trees I was familiar with, and learning more about them was a delightful experience.

– The fact that focusing on fig trees enabled the book to be both international and wide-ranging.

He could’ve chosen any other plant species or genus— indeed there have been lovely monographs on single species (eg. the sacred lotus, Nelumbo nucifera; or the tulip, or the vanilla orchid…). However, this necessarily reduces the quest’s geographic scope, and forces the author (and the readers) to narrow their focus instead of expanding it.

Ficus species, now, they’re everywhere, so the book can guide you through five continents hopping from fig tree to fig tree, leading you into tropical forests, Mediterranean landscapes or African savannahs at the turn of a page. Fun!

Sad endings leave me depressed. Doubly so, if the story is about natural tragedies. Extinctions, habitat loss, forest impoverishment… even though I know this must be talked about because it’s happening, I feel terrible after finishing a book that’s all doom and gloom.

And although Shanahan (as any scientist committed to truthful facts) doesn’t spare us the bad news in fig tree land, he counterbalances it with inspiring tales of hope, featuring volcanoes, human beings and even drones (!)

Realising not only that fig trees are keystone species within many ecosystems, but that people have recognised them and respected them as such was heartening. Sometimes the recognition is made explicit even in their names (such as large specimens of Ficus prolixa in Pohnpei, Micronesia, whose local name that means “that which holds the land”; clear reference to the roots’ protective role against erosion). Other times it’s just a general sense of sacredness and taboos on harming fig trees. Be as it may, I was glad to read that

“Don’t cut down fig trees — is a message people across the planet have repeated over millennia.”

Yet it gets even better, because Shanahan explains how Ficus trees can be the key to recovering lost or degraded ecosystems: they can help not only by preserving, but by reversing the forest tides and helping them switch from ebb to flow.

And that was a truly uplifting piece of good news.

– Learning more about fig flower mysteries and folk beliefs about them.

Although every biologist has heard, perhaps even studied the complex pollination arrangement of figs, I enjoyed having my memory refreshed with the book’s adventurous explanations… and I liked learning how present figs —and fig flowers!— have been in folk belief all over the world.

As a lover of plant metaphors, I found the Bengali saying “invisible like a fig flower” utterly charming —perhaps something you might even be inclined to agree with if this is the first time you’ve ever considered the existence and whereabouts of Ficus blossoms.

This is because fig flowers “bloom secretly”, wrapped inside the trees’ syconia — aka the figs. “Seeking flowers in a fig tree” might’ve been used in the past to describe a hopeless search, but after reading Ladders to Heaven everybody should be able to swimmingly accomplish this impossible task.

– It’s a readable book for experts and non-experts alike.

I was recently listening to a podcast where they talked about the most important ingredient of good writing, whether in fiction or in non-fiction. The answer was “you must know how to tell a story”.

I’ve since begun books that tackle fascinating topics, eg plant sensing and communication, but reading them is akin to munching on cardboard. They tell no story, just a litany of facts.

Ladders to Heaven, on the other hand, is chock-full of them, stories both interesting and well-told. About trees, about the animals that depend on them (and vice-versa), about humans. Even though the message it intends to spread is of great consequence (“Fig trees can help us save the world!”), it does so with grace and lightness.

Not that I needed convincing, but for those who might, I suspect that Shanahan’s passionate charm trumps heavy-handed eco-preaching as the best way to move a sceptic’s heart.

’Tis evident that the author has a soft spot for strangler figs.

And I’m not complaining, but… whereas the book left me a vivid impression of strangler species, I would’ve also liked to have a clearer picture of the rest of Ficus trees, most of which were mentioned just in passing (eg. what percentage of fig trees are stranglers with respect to non-stranglers? Oh… and what about Australian Ficus, by the way?).

– As I said, the book is full of anecdotes and stories; however, there is no big, overarching story that I could see in the book structure (although there is more emphasis on conservation and the ecological role of Ficus species towards the final part of the book).

There is no sense of directional unfolding, although from a narrative point of view it works beautifully, with a seamless integration between one vignette and the next.

Whereas reading some books feels like an ascent towards a high vantage point that you reach by the end of it, others begin by lifting you up and dumping you onto a plateau, then showing you the views from different angles of the high plain. In my opinion, Ladders to Heaven belongs to the plateau group.

– The illustrations, also made by the author, are a nice complement to the book information. Having done a few myself, I know there’s quite a bit of work involved there!

– Still, I must say that, as somebody who’s strapped for cash and spends money on books veeeery carefully… I was surprised at how thin the book was when it arrived in the mail. It was something of a shock to realise that Of Perfumes & Gods: Tales of Olibanum is actually longer!

Then again, this might very well be just me and the way my brain works.

It does get one big bonus point for its excellent bibliography though. Very up to date, and something I’ll dig into for future fig references.

If you are still unsure of whether it’s your cup of tea or not, I’d advise you to visit the author’s blog, Under the Banyan: there’s lots of information there well worth exploring!

2 thoughts on “[Book-a-Leafing] Ladders to Heaven”

This site uses Akismet to reduce spam. Learn how your comment data is processed.